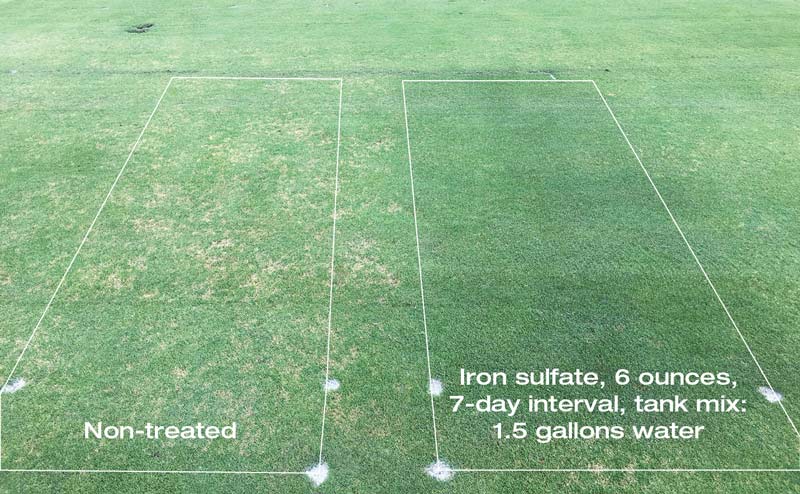 Dollar spot is the most economically important disease of golf course turfgrass, and insufficient cultural control measures have led to a heavy reliance on repeated use of fungicides.

Iron sulfate (FeSO4) has been used for decades in the turfgrass industry for its ability to improve turfgrass color (3). Recent research out of Oregon State showed that FeSO4 can provide excellent control of Microdochium patch when applied at regular two-week intervals (1). In addition, researchers from Virginia Tech demonstrated that FeSO4 can provide significant reductions in dollar spot on a creeping bentgrass putting green when applied at high rates (1 pound/1,000 square feet; 48.8 kilograms/hectare) every two weeks (2). However, in both cases, the FeSO4 injured the putting surfaces to an unacceptable level after repeated applications.

The objectives of this study are to determine the impact of FeSO4 and urea, both alone and applied as a tank mixture, on the development of dollar spot, and to identify the appropriate reapplication interval and water volume that provide effective dollar spot control and optimal turf quality.

Study design
Separate studies were conducted for each objective listed above, and both studies were replicated at the O.J. Noer Turfgrass Research and Education Facility in Madison, Wis., and at Minnesota Valley Country Club in Bloomington, Minn.

Year 1 results
Objective 1
Treatments containing iron sulfate generally reduced dollar spot relative to the non-treated control at both locations (Table 1). Applying iron sulfate at a seven-day interval was much more effective than applications at a 14-day interval (Table 2). Urea, alone or in combination with other products, was not consistently effective at reducing dollar spot at the rates used in this study. Iron sulfate mixed with Emerald (boscalid, BASF) was extremely effective at suppressing dollar spot at the Minnesota location. However, Emerald did not effectively control dollar spot at the Wisconsin site. The poor control provided in Wisconsin may be an indication of fungicide resistance to Emerald, which has been repeatedly used at the research facility over many years.

Objective 2
At both sites, there was a clear dose response within the seven-day reapplication interval where higher rates of iron sulfate resulted in less dollar spot. The greatest dollar spot reduction was provided by iron sulfate applied at 12 fluid ounces/1,000 square feet (38.2 liters/hectare) every seven days, but this resulted in a very dark color that may be undesirable for superintendents. No strong influence of water volume on dollar spot severity was observed.

Summary
Iron sulfate provided significant suppression of dollar spot in the first year of this two-year study at sites in Wisconsin and Minnesota. The seven-day reapplication interval was almost always more effective than the 14-day interval, suggesting that lower rates at shorter intervals is a more effective iron sulfate use strategy than higher rates at longer intervals.

The urea treatments in this study did not consistently reduce dollar spot. The study will be repeated at both locations in year 2, but the fungicide treatment will be changed to account for the possibility of fungicide resistance at the Wisconsin research station.