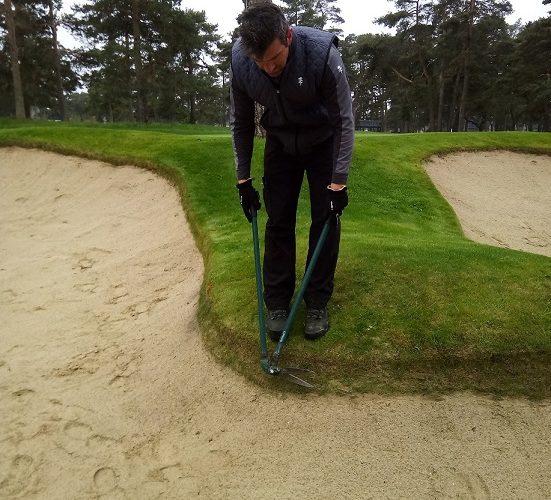 The weather is getting warmer. Or less cold I should say, because 12 to 15 degrees isn’t that great. This is supposed to be the warmest region in Sweden, but in Stockholm (400 km to the north) they’ve hit 25 degrees already. It doesn’t make it easier at our high end club in Kristianstad, but at least the grass is growing now. We try our best to give the players a nice golf experience and we try to maintain the high position on the Swedish ranking.

Presentation, presentation, presentation.
That’s what the young Bevan Tattersal was told at The Belfry and now he’s telling it to us, the FEGGA students. There’s no time pressure but it has to be perfect. When you don’t like one of you mowing lines: mow it again. When a sign on the course looks a bit crooked, stop what you’re doing and put it straight again. And when the grass on a path is starting to get a bit thin, we take out the sod cutter and put down some new turf. These might be just details, but on a course like this they have to be perfect.
Pin positions and tee markers are moved daily. To keep the wear and tear to a minimum, but mainly to improve the experience for the golfers. People staying at the lodges like to play daily and it’s a lot more fun to play on a “different” course.
The maintenance can get quite physical around here. Greens and tees are cut with single mowers and all 82 bunkers of the East Course are raked by hand. The bunker edges, which are mostly revetted, are cut by hand with scissors. It’s very labour intensive but it provides an excellent finish.
To round up this little summary we’ve got the fairways. These are cut daily at a specific angle to get perfect “diamonds” on the surface. They all have to have the correct shape and point straight at the green. Clippings are always collected. To keep these fairways in top shape there’s also the divot crew. Each Tuesday morning about ten volunteers from the club fill up all divots. The members here are really proud of there club. They happily perform this task and take pride in it.

Golfer / Greenkeeper
All greenkeepers here at Kristianstad’s Golfklubb play golf, but two of them are actual professional players. Ludwig “Ludde” Nordeklint was mainly active on the Scandinavian and Challenge Tour. Here at KGK he’s also well known for his hole-in-one on hole seven, a par 4 dogleg. Ludde has always combined his professional golf with his job as a greenkeeper. That’s something he would never trade in to become a teaching pro.
Åke Nilsson also started at the Scandinavian Tour, but reached the European Tour after a couple years. He has certainly made his mark with over 30 tournaments and a couple top ten finishes. During the years before the pandemic he mainly played on the Challenge Tour, but this year he’s trying to get to the European Tour once again through the Qualifying School. Meanwhile he works as a greenkeeper at his home club in Kristianstad. He enjoys this so much that he definitely sees his future in greenkeeping.
It might seem a bit odd these days, going from professional golfer to greenkeeper (certainly for me as a Belgian), but it wasn’t always the case. The first club professionals often acted as greenkeepers as well. Old Tom Morris, widely regarded as the father of modern greenkeeping, won The Open four times between 1861 and 1876… It does make sense when I think about it: Ludde and Åke are both physically strong and they combine attention to detail with their perception of the golf game. Åke’s vision on greenkeeping: “I’d like to get the course in a state in which I would want to play it myself”. In my opinion that has to be one of the best possible motivations for a greenkeeper!
Through our national greenkeepers association in Belgium we try to get our greenkeepers into playing golf themselves. A good chef has to taste what he’s preparing, right? We’re very pleased our yearly greenkeepers golf tournament is still gaining popularity. After a Covid break in 2020 we would like to resume this tradition this autumn. I could use some practice myself, so I’m going to get my golf bag and I’m off to the practice area. Hej så länge!

Michel Van Uffelen was head greenkeeper at Golfclub Beveren and Koksijde Golf in Belgium. In the past four years he was responsible for the pitch of the Belgian national stadium and several professional football clubs. Since April he works and studies in Sweden through the FEGGA scholarship programme.